Shogi (将棋), or Japanese Chess is a classic board game native to Japan and descended from Chaturanga, the same ancestor as Chess. In its modern form, it has been around since the 16th century. The game is very popular in Japan, where it is more played than western chess and there is a thriving professional scene. The game itself is both similar yet very distinct from western chess, introducing the ability to drop captured pieces back onto the board.

If you enjoy Chess, Shogi is definitely worth trying. While slightly slower paced and longer than Chess, the game is also more dynamic and complex, leading to a very different experience. Shogi is between Chess and Go in terms of complexity, but don’t let that deter you. As with other chess variants, improving your skill in Shogi can also improve your skills in Chess as well as open up new ways of thinking! See here for more about that.

The rules are similar to Chess, so this guide will focus on the differences. Shogi is played on a 9 x 9 board. Players take turns moving pieces on a board to checkmate the enemy king. The black player, or sente (先手 first player), moves first, followed by white or gote (後手 second player), which is the opposite of chess. These colors are just arbitrary and do not reflect the actual color of pieces.

A significant difference from Chess but similar to its Crazyhouse variant is that you can drop captured pieces onto the board as a move. There are a few restrictions to dropping notably with pawns, which are discussed later, but otherwise pieces can be generally dropped anywhere. Additionally, almost all pieces can be promoted. Pieces are promoted upon entering the promotion zone / enemy camp (last three ranks) or moving a piece already in the enemy camp. The piece will then flip over. Captured promoted pieces are returned to their unpromoted side when added to your hand. 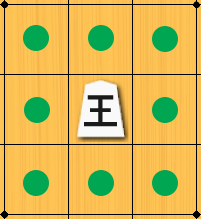 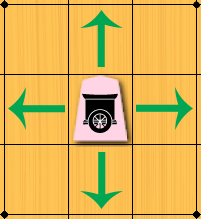 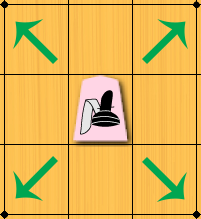 The bishop moves exactly like a chess bishop: any number of squares diagonally. The international piece depicts a traditional hat worn by a Japanese official. The bishop is the second most valuable unpromoted piece in the game, excluding the king. 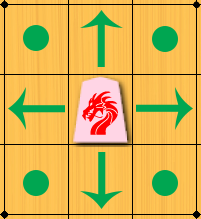 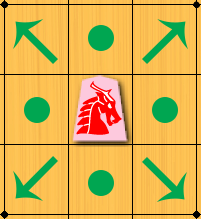 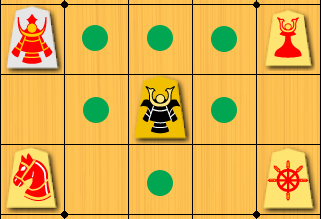 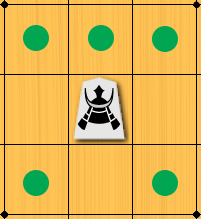 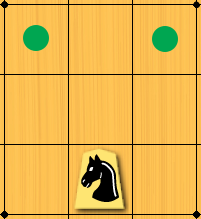 Similar to a chess knight, but can only move to the two spaces in front, i.e. it can move forward two and sideways one. Like the chess knight, this piece can jump over pieces. 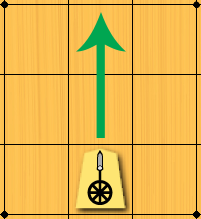 A lance can only move forward, but in any number of squares (similar to a rook). 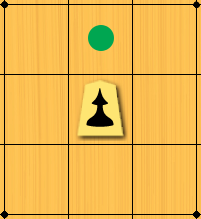 There are different notations used, including one in Japanese. We use a form of western notation (Hodges notation) similar to chess.

One noticeable difference is that the board coordinates are switched from chess. Files are numbered, and ranks are alphabetized. The origin is the bottom left for the white player. However, since most diagrams are oriented for the black player (first player), these will seem to originate from the top right. As an example, the white king is on square 5a.

In the Hoskings notation, only numbers are used. Instead of 5e, someone might say 55 (5th rank, 5th file). This is similar to the Japanese style, which also uses numbers.

Hidetchi’s YouTube channel is an excellent place for beginner and intermediate players, alike. They are in English and very carefully break down the aspects of the game. Please note that like all other resources, you will need to be familiar with the kanji pieces in order to understand the videos (he also introduces the pieces in the beginner videos).

81dojo.com is a site where you can play internationally against tougher players. However, it does not support correspondence play at this time.

There is no standard piece value in shogi unlike chess. However, it's important to keep in mind that values are not worth as much, as losing pieces isn't permanent and position is far more important. That said, there is a basic piece value system, but professional players have also made more specific values; Tanigawa and Satoh's are shown below.

This difference matters because opening moves (called joseki) are classified as one of these two and can drastically change what kind of game is played. Certain static rook openings are meant for enemy static rook openings, while others are directed against ranging rook players.

Castles in shogi are defensive formations that take multiple steps to form. Knowledge of castles is essential because weak king defenses can be quickly exploited with drops in your own territory. It is also important to know each castle’s strengths and weaknesses.

The Yagura castle is one of the most powerful static rook castles, used against static rook. A mnemonic that may be useful for remembering the positions of the generals is “S G | G B”, or perhaps remembering that the king is guarded by the gold general, a strong defensive piece. Yagura is strong at its front, but weak on its edge and side.

For development of the Yagura, remember that generals always move diagonally to be most efficient. There are different josekis for developing the castle, but keep in mind that at any point white can attack and that you may have to react in between your developmental moves. The 24-move standard joseki is as follows (Source: Hidetchi):

The Mino castle is a classic ranging rook castle, used against static rook. The king moves to the rook’s starting spot, the left gold moves up+right, and then the right silver moves up to form a “G G S” V formation. This castle is strong to the left, but weak to the front and edge.

After this point, you are free to exchange bishops and as many pieces as you want, including rooks to generate an attack. 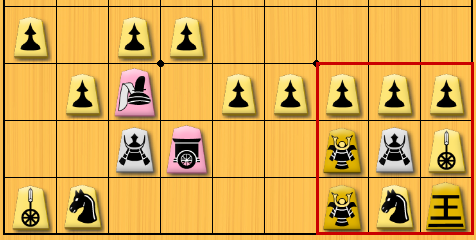 Anaguma (AKA “Bear in the hole”) is another ranging rook castle, and one of the most impenetrable in the game. However, it takes a long time to form.

Not a castle per se, but a static rook opening. Both sides advance their rook pawns, leading to an exchange. Part of the joseki is that the silvers must defend the bishop pawns before the enemy pawn reaches its target. Of note, this is AlphaZero’s favorite opening, accounting for more than half of its openings as black.

Unlike chess and more similar to go, handicaps are a big part of teaching and should not be treated as one player giving pity to another. They are a great way to learn the game, and there are even standard strategies for different types. In Shogi, handicap games are fairly standard, and the most common setups are described below.

While normal games have black (sente) starting, white goes first in handicap games. White is called uwate while black is called shitate. Despite the handicap, the material difference can be overcome because of drops. And since there are fewer powerful pieces, black/shitate loses a lot more when a piece a captured.