Kyoto shogi is a shogi variant on a 5x5 board, but is quite different than standard shogi. It was invented by Tamiya Katsuya c. 1976. The main distinction is that each piece flips sides to a completely different piece with each move. Many of the piece combinations are puns relating to Kyoto. For example, the lance (kyo) is paired with the tokin (to), which makes "Kyoto."

The starting setup is as above. Unlike in shogi, each piece (except the King) must flip to the other side after moving. All pieces represent a pair of pieces. On two of the sets, the alternate side is shown in red so that what you know what the piece will become. 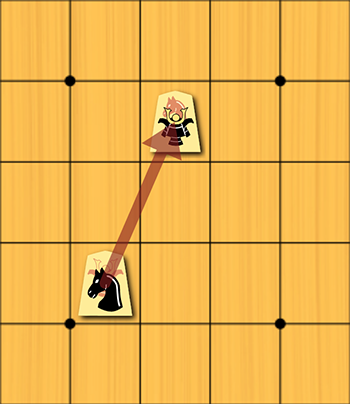 In the example above, the knight-gold piece is shown. When the knight moves, it flips and turns into the gold general(notice the red shadow behind each piece). If the gold general were to move, it would become a knight again.

Sente is the player that goes first. Sente is typically represented as the black player. On the international set, this is indicated by a black king. In Kanji, we fix sente to the player with the 玉 piece.

Gote goes second and is typically represented as the white player. On the international set, this is indicated by a white king. In Kanji, we fix gote to the player with the 王 piece.

This guide will be using the international set for describing pieces. Each pair of pieces is listed below.

Every piece type in standard shogi is used except the dragon king and dragon horse. 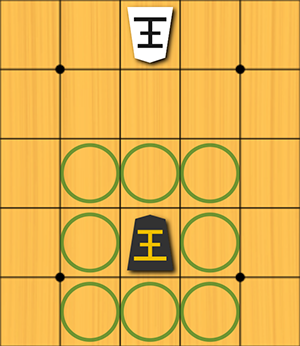 The king moves exactly like a chess king: one step in any direction. Both black (sente) and white (gote) kings are shown in this illustration.

The rook moves any number of squares orthogonally (up, down, left, or right).

The gold moves one step orthogonally or one step diagonally forward. In the international set, the gold's moves correspond to the protrusions of the helmet.

The knight can jump two squares only. These are the squares reached by moving two squares forward and then one to either side.

The silver moves one step diagonally or one step forward. In the international set, the silver's moves correspond to the protrusions of the helmet.

The bishop moves any number of squares diagonally.

The tokin moves exactly like a gold. In Shogi, the tokin represents a promoted pawn. In the international set, it is a pawn wearing a gold helmet to symbolize this.

The lance moves any number of squares straight forward.

Still being worked out -- please feel free to offer advice as you find it!