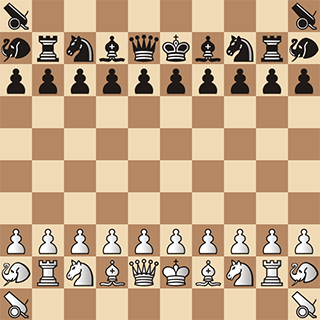 Shako is a chess variant created by Jean-Louis Cazaux. The game is played on a 10x10 board and introduces two new pieces, the cannon and elephant, which are both derived from Xiangqi (Chinese chess). In his own words:

"The name Shako means Chess in Esperanto, another kind of non-conformism and utopia. The idea is to make a new game without directly disposing the large heritage of the classical game. All rules of orthodox chess are kept, and the way the pieces are placed in the opening setup allows players to follow practically all the openings used for usual chess. One new pieces are taken from Xiangqi (Chinese Chess), with the intention to bring back together the two branches of the game that went of from India either east to the Orient, and west to the Arabs. The second new piece is taken from Shatranj and mediaeval Chess in order to bridge with a prestigious past.

I finished to design this game in 1990. Shako has an entry in D.B.Pritchard's "The Classified Encyclopedia of Chess Variants" (2007)."

The rules are essentially the same as chess, but with two new pieces, the elephant and cannon. Because of the 10x10 board, pawns promote at the 10th rank, and they may also promote to an elephant or cannon if desired. 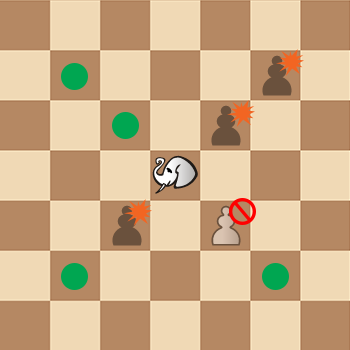 The elephant is similar to the one in xiangqi. However, there is a significant difference. While the xiangqi elephant can only move exactly two spaces diagonally, the Shako elephant can move one or two spaces diagonally. In addition, it can leap over the first diagonal spot like a knight can leap over pieces. While there is less range than a bishop, the ability to leap gives it a little more flexibility. 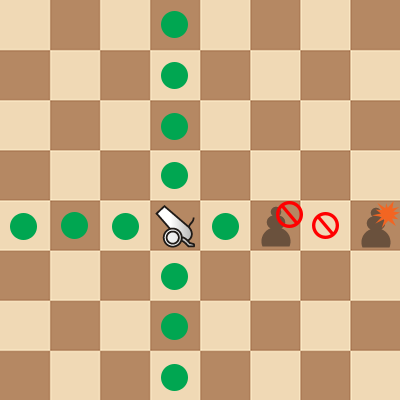 The cannon functions exactly like it does in Xiangqi. When moving, it moves exaclty like a rook. However, when attacking, it needs to jump over a piece (a "screen") to attack the next piece beyond. In Shako, the cannon is one of the weakest pieces. However, it can be a very tricky piece that can be used in a variety situations. Because of its need to use other pieces to attack, the cannon is very weak in the endgame.