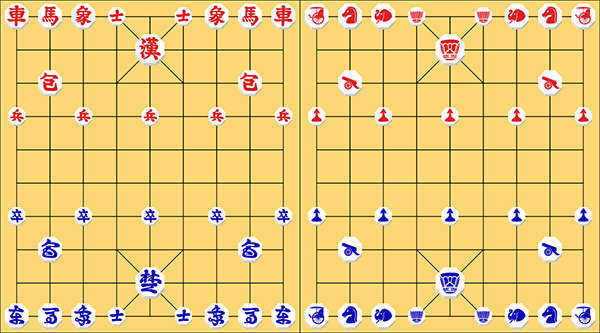 Janggi (장기, pronounced like “jahng-ghee”), or Korean Chess, is a classic board game native to Korea. The game is derived from Xiangqi and is very similar to it.

Rules: Board and Setup

There are two sides, one is colored red (called Han), and the other blue (called Cho). The blue side can also be colored green. These two sides represent the two sides in the Chu-Han Contention from Chinese history. Red pieces are written using Chinese characters (hanja), while blue pieces are written in cursive-style hanja.

Setup for all pieces except for the horse and elephant are as in the picture above. Like xiangqi, janggi is placed on a 9 x 10 board, where pieces are placed on intersections rather than squares. The 3x3 square with the X on each side is called the Palace. Unlike in most other chess variants, in janggi, players can choose the starting positions of the horses and elephants. There are four types to choose from:

Red (Han) chooses his positioning first, then Blue (Cho) chooses. However, Blue is the first to move the pieces.

For repetitions and other game-end scenarios:

This guide will be based on the internationalized set. Traditional sets use Chinese characters (hanja), and many sites, including Wikipedia, already explain the rules as such.

Several pieces have special moves utilizing the diagonals in either palace, which will be discussed below. In the diagrams, a lighter shade of green is used.

The King (also known by its Chinese name, the general) is restricted to the palace and can move within lines of the palace. This means that when the King is in the center, it has 8 possible moves. However, on any other spot in the Palace, it only has 3 moves.

Special rule: When a King faces the other King, this causes bikjang. The next player must then move his king out of the way or else the game is ended. See rules below regarding bikjang. 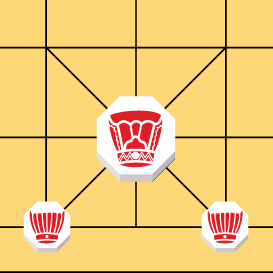 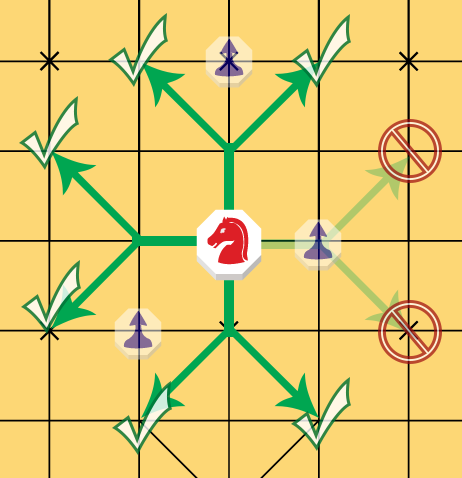 The Horse (also called by its Western name, the knight) moves almost exactly like a chess knight. However, instead of the usual “two steps orthogonally, then one to the side” teaching, it’s better to think of it as one step orthogonally, then diagonally forward in either direction, like a Y shape. The reason for this is that the horse can be blocked if a piece is adjacent to it. That will block off the two endpoints of that Y. Therefore, there can be situations where two horses are targeting each other, but only one can attack while the other is blocked. Strong moves take advantage of blocking the horse and limiting its movement. 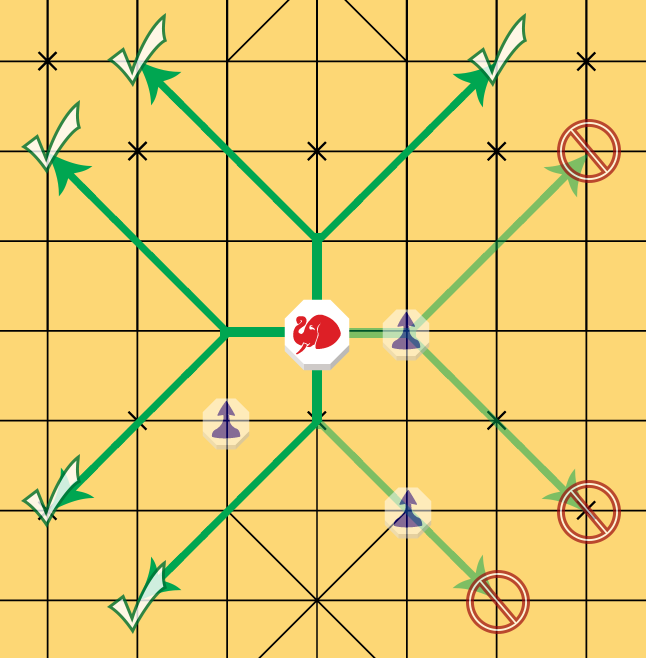 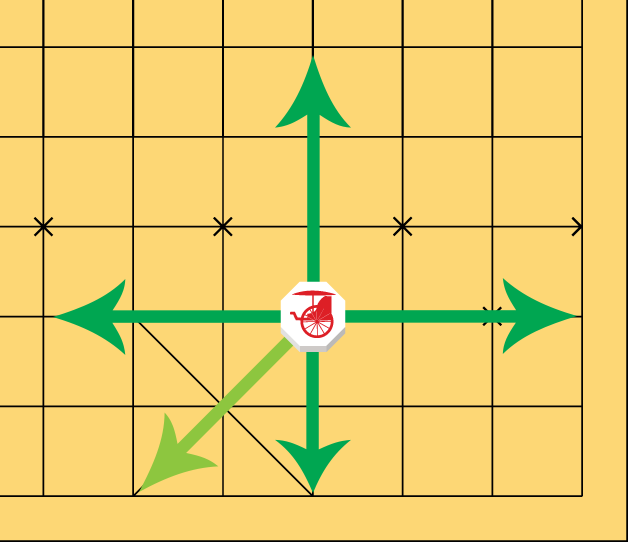 The Chariot (also called by its Western name, the rook) moves exactly like a chess rook: any number of squares orthogonally. This is the most valuable piece in the game, excluding the king.

Palace move: When in the palace, the chariot can also move along the diagonal lines. 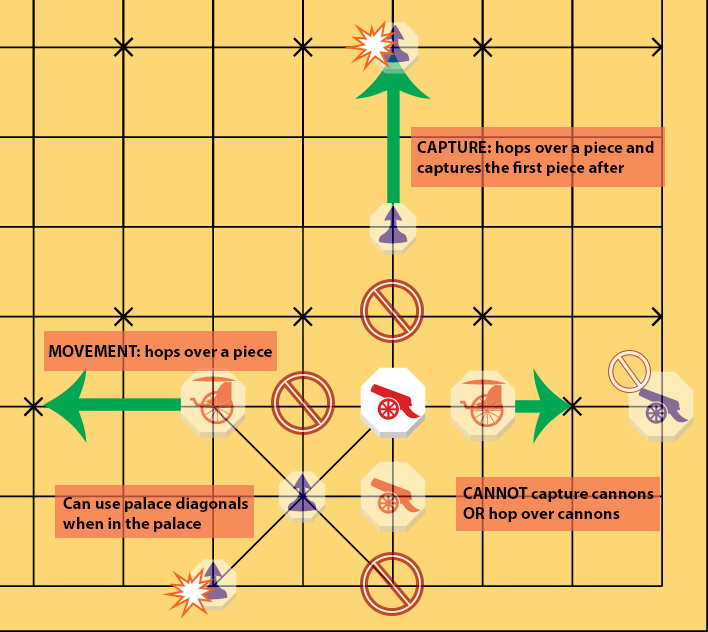 The Cannon is slightly different than its xiangqi counterpart. It moves orthogonally like the chariot, but it needs an intervening piece (called a "screen") to hop over first. It can then capture the next piece along the same line. Unlike xiangqi, the Cannon cannot move without a screen.

EXCEPTION: The cannon cannot use another cannon as a screen. Additionally, it can't capture the opponent's cannons.

Palace move: When in the palace, the cannon can also move along the diagonal line. Practically speaking, the cannon must be on one corner, where it can move or attack the opposite corner if a non-cannon piece is in the center (as in the diagram). 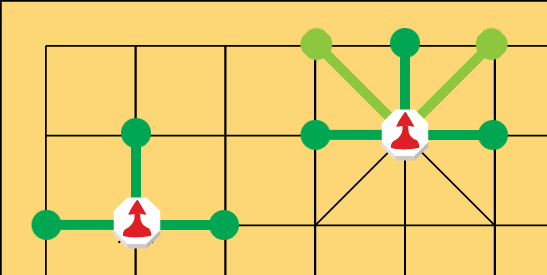 The Pawn (also called by its Chinese name, the soldier) moves and captures by moving forward or sideways one square. This is different than the xiangqi pawn, which needed to cross the river first to move sideways.

Palace move: When in the palace, the pawn can also move forwards along the diagonal lines.

Janggi notation works much differently than other variants. First of all, coordinate numbering. From blue's perspective, ranks are numbered from 1 to 10 going down from top to botttom. However, the 10th rank is called 0. Files are numbered 1 to 9 from left to right. Describing a piece location is the opposite of chess. A location is described by rank then file (in all other variants, it's file, then rank). So for example, the blue chariot in the bottom left corner is at 01. The intersection above it is 91. The blue king is located at 95.

For example, the left chariot moving three spaces up is denoted by R01-71. "R" refers to the chariot. For piece abbreviations, see below.

Like chess, the goal is to checkmate the other king.

Unlike most other chess variants, you may pass in Janggi. Therefore, stalemate is impossible. To pass in Pychess, ctrl+click on your King, or simply click the pass button on the right.

Unlike Xiangqi, the kings may face each other on the same file in Janggi. This creates a situation called bikjang ("laughing generals"). If the next player to move does not make a move to break bikjang (for example moving a king or moving a piece in between), then the game ends in a draw. For tournaments that don't allow draws, the value of the pieces on the board are counted up, and the player with the higher value wins.

Because blue (Cho) starts the game, they start with an advantage and thus red (Han) also receives 1.5 points (deom) as a compensation. The .5 is added to avoid ties.

Currently, Pychess uses tournament style and does not allow draws. Therefore, games are settled by points when bikjang occurs.

Additionally, it's possible to cause bikjang and check at the same time. In this case, bikjang takes priority.

Repetition is illegal; however, the way this is handled is variable. Repetition is not handled in Pychess, so in the event of repetition, the players should adjudicate the outcome between themselves.

Aside from the rules above…

These videos by Amphibian Hoplite are an excellent start for English players. Available resources in English are otherwise fairly limited.

Here is another video by Kolo (AKA Galdian) that also goes over opening principles. 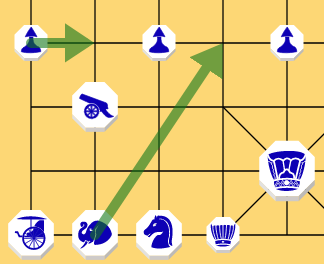