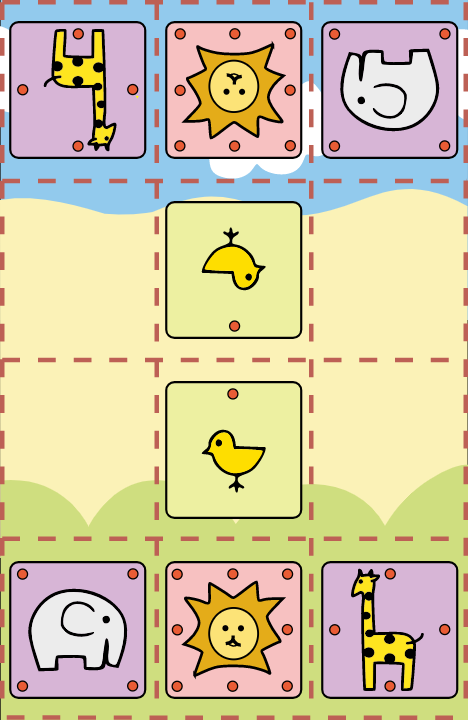 Dobutsu Shogi (どうぶつしょうぎ, "animal chess") is a small shogi variant for young children. It was invented by female professional shogi player Madoka Kitao (北尾 まどか, Kitao Madoka), partially to attract young girls to the game. It is played on a 3×4 board and generally follows the rules of standard shogi, with a few exceptions described below.

The rules are simple, you must either capture the enemy Lion (King) or move your own Lion into the final rank. All piece moves are indicated on the pieces themselves (see the board above). There are no ranging pieces, so the Giraffe and Elephant only move one space each, despite being based on the Rook and Bishop.

Like Shogi, pieces that are captured are sent to your own hand. In lieu of moving a piece, you can also drop these captured pieces back on to the board as your own.

Unlike Shogi, only one piece can promote: The Chick (Pawn) promotes to a Hen (Tokin) when it reaches the final rank.

The Hen can move one space orthogonally in any direction like the Giraffe. Additionally, it can move diagonally forward by one space.

Also unlike Shogi, there are no Chick/Pawn restrictions. You may drop two Chicks in the same file. You may drop a Chick in the final rank (this is ill-advised though, as this Chick is then unable to move). And you may checkmate with a dropped Chick.

If the players play the same position three turns in a row, the game is a draw. Unlike in Shogi, perpetual check is also a draw.

Dobutsu Shogi is a solved game (in favor of the second player). However, to learn the moves for a perfect game is beyond the skill of most humans.
https://variantslove.netlify.app/ by Tasshaq is recommended for everyone.
Bottom line: Enjoy the game. :)