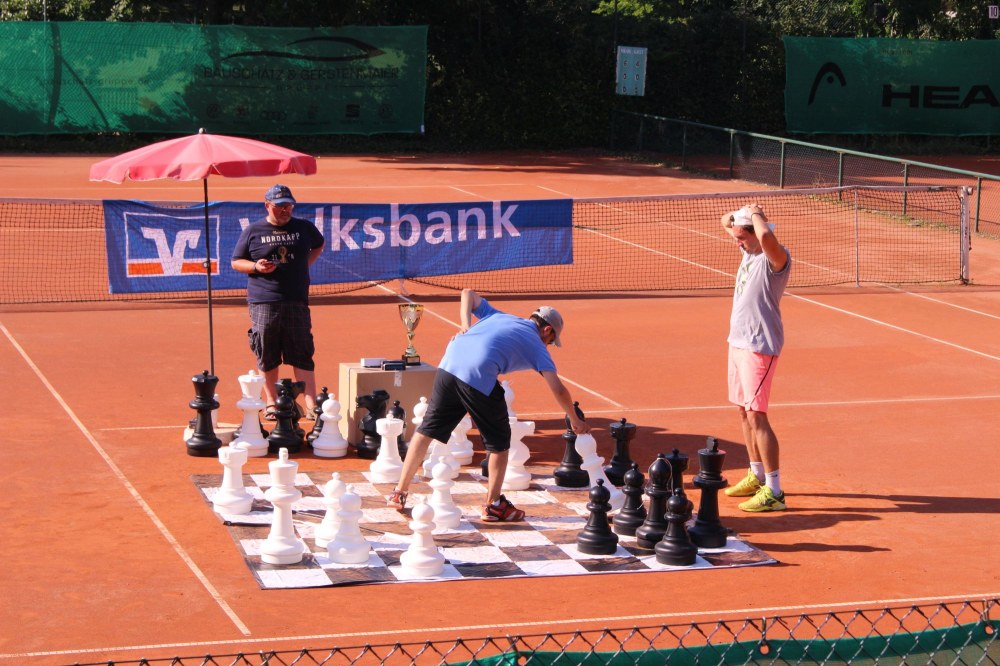 For all of my variants, I have a particular background or challenge in mind when making this variant. Much like Shogun was a reaction to the archbishop/chancellor games that are so prevalent, Chennis is a reaction to Kyoto Shogi, one of our favorite variants (if you haven't played it, try it out!). In Kyoto Shogi, pieces flip between unpromoted and promoted sides after each move, which makes for a wild experience. One of the problems for Kyoto Shogi is that it is a solved game. Another is that it is harder for non-shogi players to get into, as they also have to learn the Shogi pieces first.

So my goal was to:

As Chess pieces had more range, I needed a slightly bigger board to accomodate them, resulting in a 7x7 board. However, to keep the game as fast-paced as Kyoto, I also had to restrict the kings. This resulted in sectioned-off regions of the board that coincidentally resembled a tennis court. Because of the back-and-forth nature of the game, the parallels to tennis were embraced, and the game became "Chennis" (as opposed to "Kyoto Chess")!

The pieces in Chennis are all a combination of short-ranged and long-ranged pieces. To allow for more options, I also used the soldier/pawn and cannon from xiangqi. In addition to the restricted king area, you could say this game also features a lot of xiangqi. And in combination, this game is an amalgamation of Chess, Xiangqi, and (Kyoto) Shogi!

As for the balance, that took a lot of tries, but thanks to Procyon and his help in testing multiple setups, I was able to reach an approximately 60-40 balance by AI, slightly in favor of white, which was more than reasonable (humans are unlikely to feel any imbalance especially since the armies are not asymmetric). And thanks to e-pluszak and Untitled Entity as usual for vigorous playtesting.

Anyways, for more details, please check out the guide for the rules and give it a shot!

Hope you all enjoy!

Also, in other news, we now have a calendar where you can see what tournaments are planned in advance! Many of these are now automated. As always, if you want to play a specific tournament, we're welcome to create one, but it's also recommended to recruit other people who are willing to play, especially if in it's a different time zone than usual.